Maps for grief: A breakdown

A bit of context: Maps for grief is a generative art project, published on the art blocks platform. It explores the notion of togetherness without contact. If you're interested, I published an introductory post about the series before its launch: Maps for grief.

By reading this post, non-technical people should understand the mechanisms that draw a Maps for grief iteration, and someone technical should have enough of an explanation to code their own take on the same idea.

How each iteration is drawn

The basic structure of Maps for grief is the interaction of two noise fields. A noise field is a map of random values across coordinates, with rules governing how its values change across its area. In our case, each field is two-dimensional, and filled with Simplex noise. This means that two points close to each other will have very similar noise values, while points further apart could be more different. You can picture a map of rolling hills, with the lowest points having a value of 0, and the highest ones, 1.

Each of the two fields has a specific role: The first one is turned into a flow field – each value represents a certain angle. You've certainly come across art based on flow fields in the past – like Tyler Hobbs' Fidenza. In our case, the flow field is used to orient how each line moves in the space once it starts being drawn.

In the rules I set for drawing lines in Maps for grief, each line has a finite length that it attempts to draw without touching another shape. Each composition tries to insert a total of ten thousand such lines at random positions within its margins. The first ones always have the space to be drawn, while the very last are usually all skipped, since the space is already filled by previously drawn lines.

If we simply drew based on the first flow field, then the artwork could look pretty, but it wouldn't have much substance. Here's how the line work would turn out (I left most other rules in, which is why the first one is split in two regions): 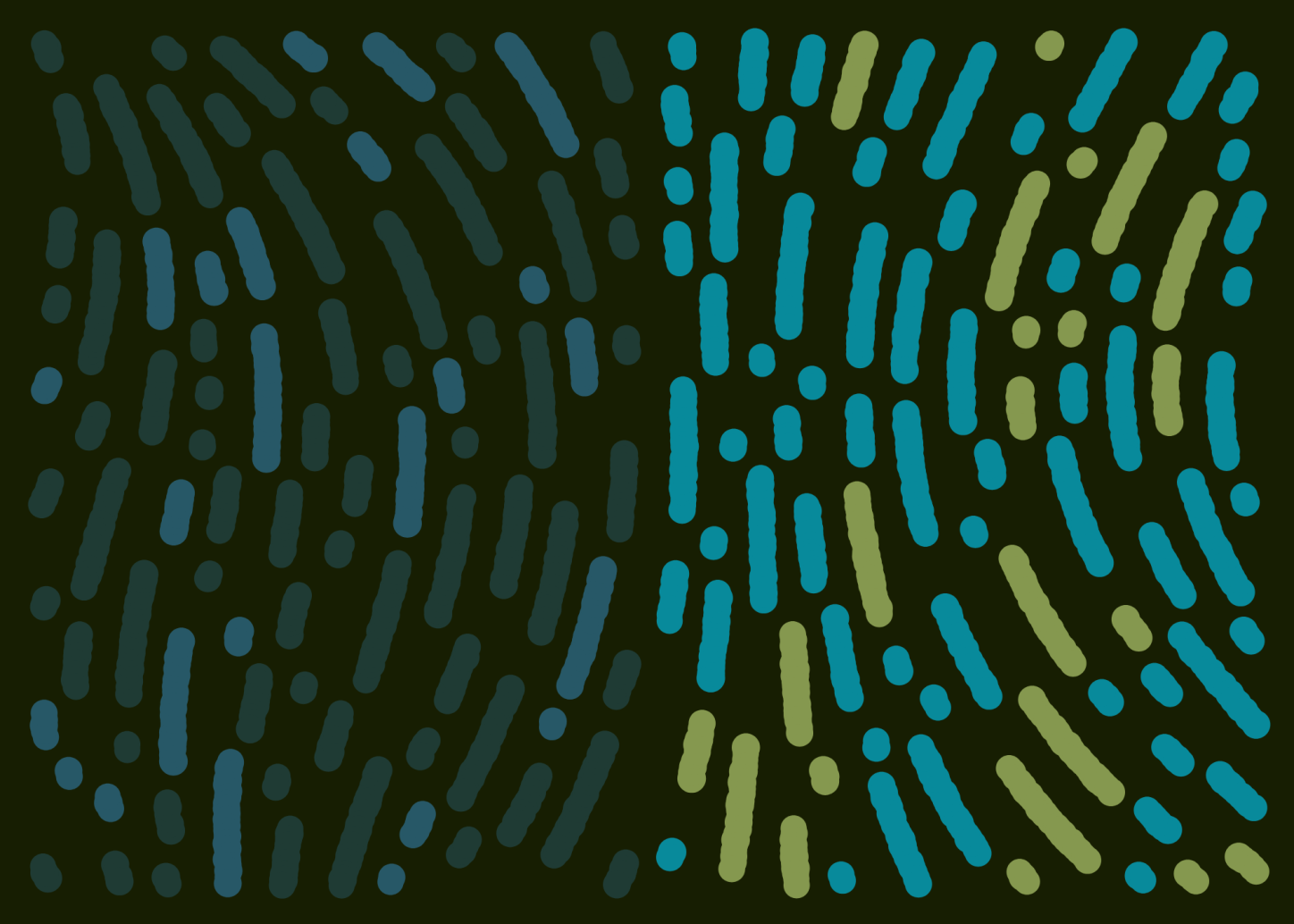 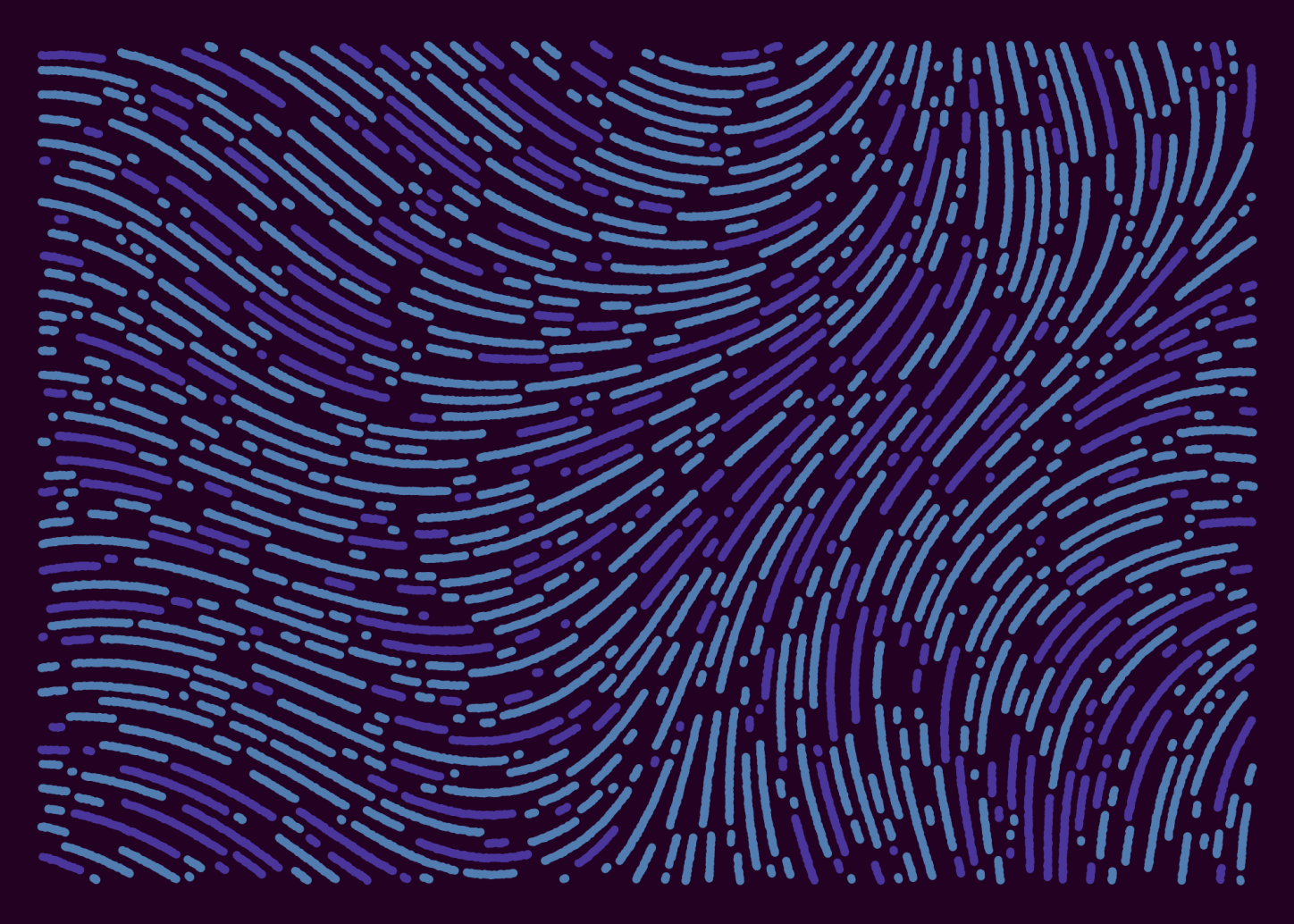 The second noise field, as it grows in value, forces these lines to stop drawing sooner, and at extreme values, prevents them from drawing entirely. It's also responsible for turning "stopped" areas into symbols instead, and it affects the colour selection across the composition. By adding the second field's influence on drawn lines, we end up with results like these: 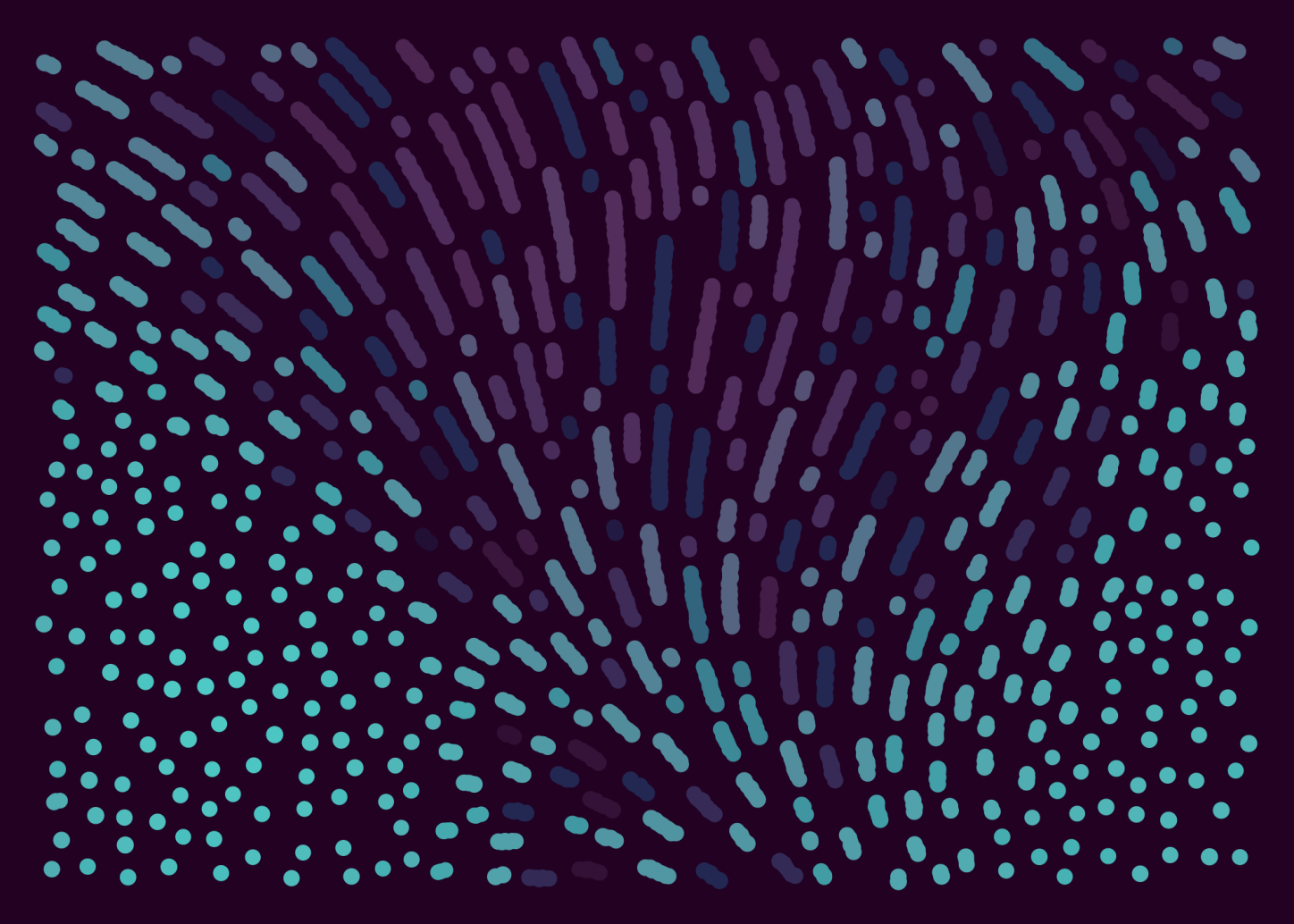 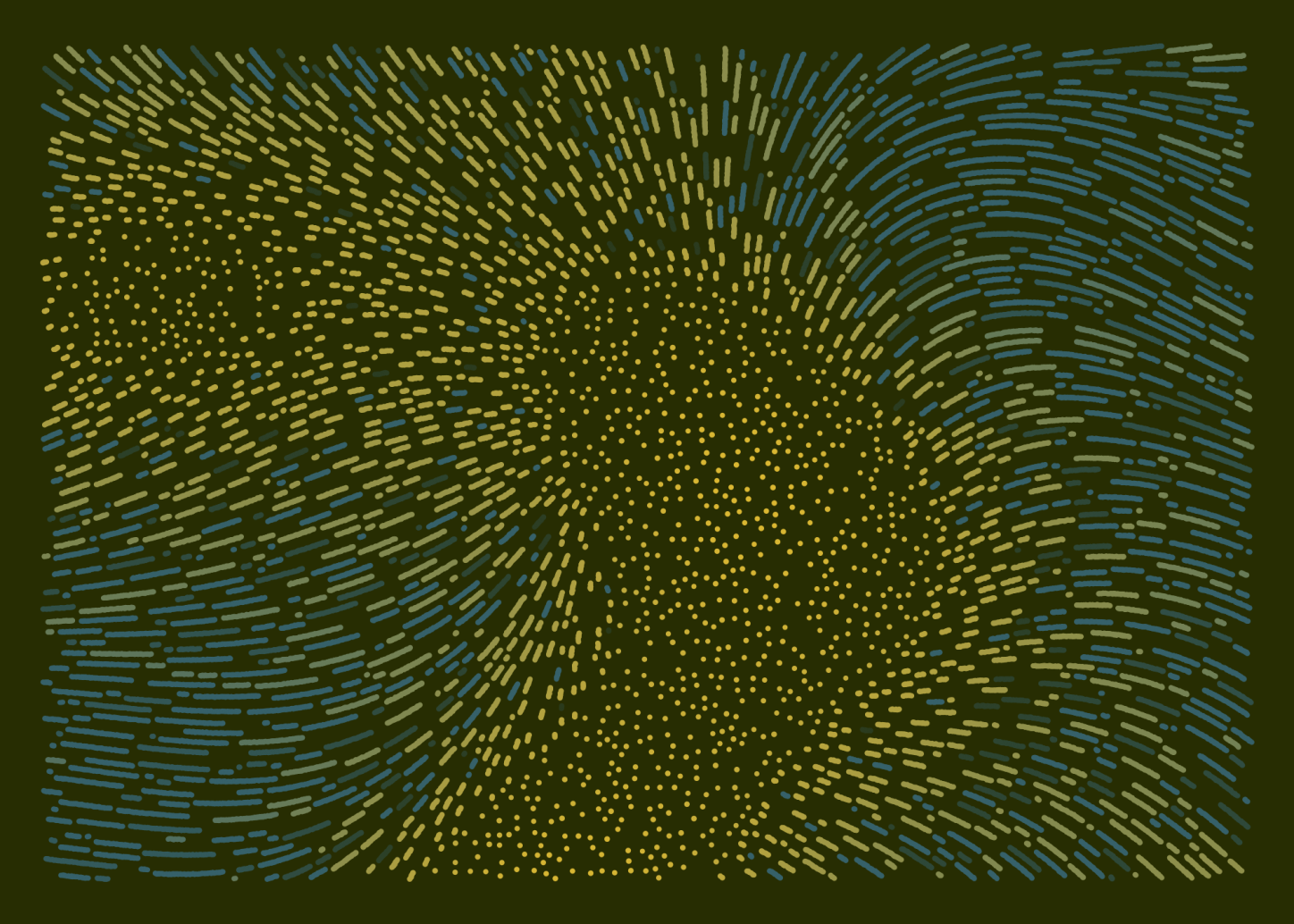 The last part is inserting symbols. The most on-the-nose part of Maps for grief is the drawing of these symbols, which appear in areas where lines can't flow. These are the regions where the secondary field is the strongest. Each iteration has a single type of coping, deciding what type of symbol is drawn. There can be different drawing rules for different symbols, which helps give each of the coping types a specific personality.

Putting everything together, here's the sort of outputs we get: 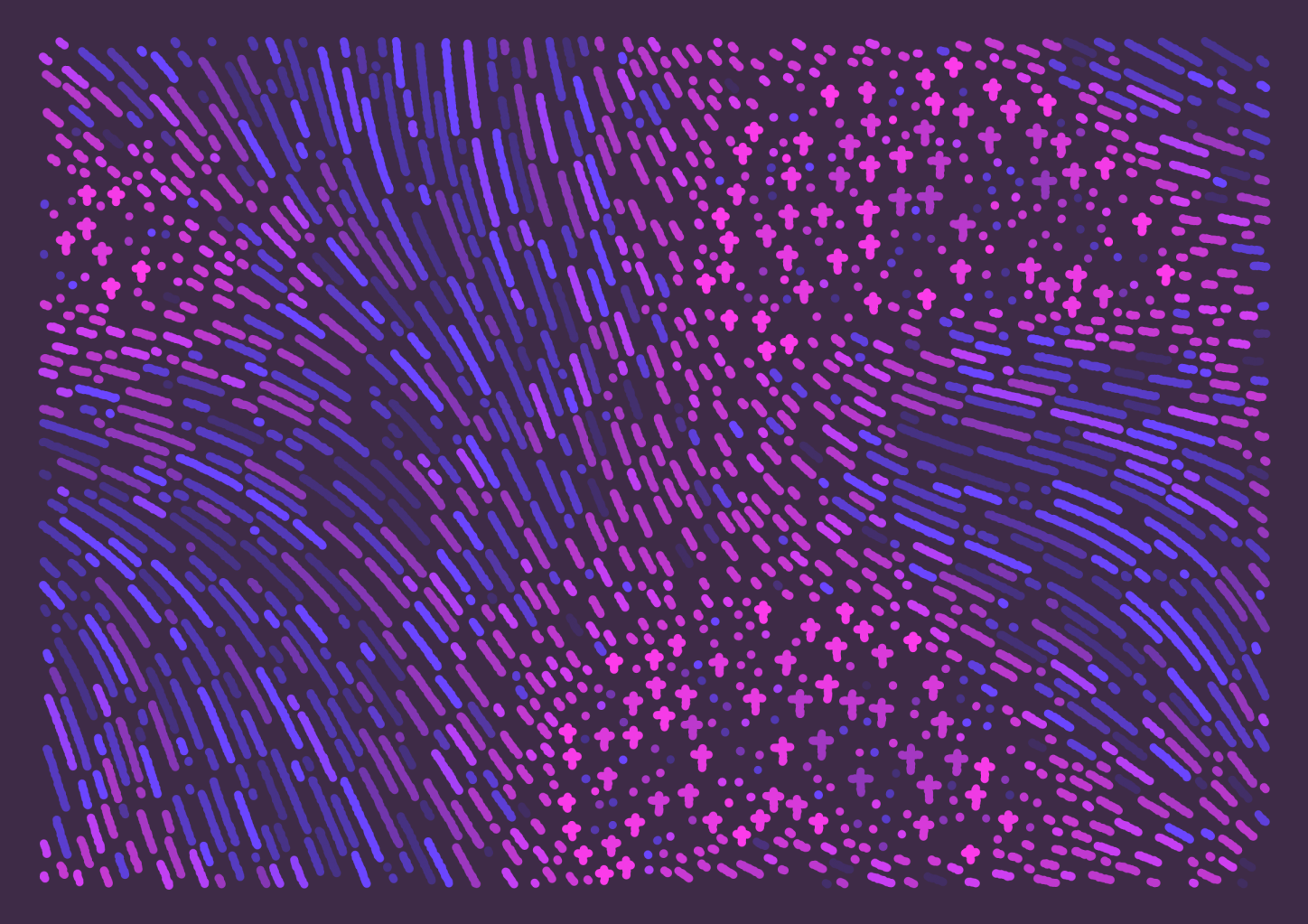 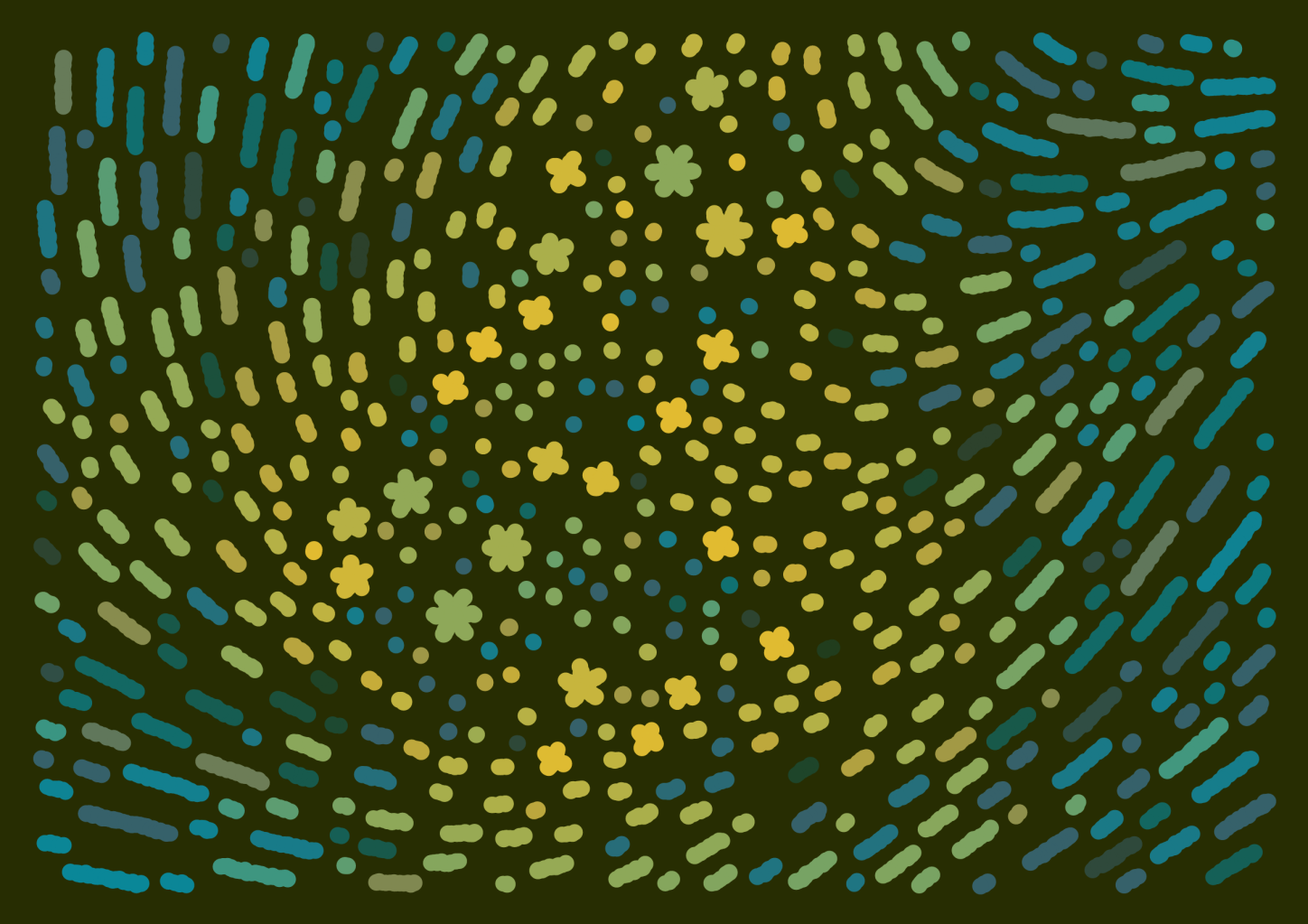 There are a ton of small pieces and details, but that's the gist of it. Let's analyze the main features involved.

Coping is one of four values: raw (drops, or tears), nature (mountains), mystical (asterisks), and spiritual (crosses). Crosses and mountains can huddle very close together and create areas that change in density, tears follow the flow of the field, and stars vary how much branches they have in reaction to the secondary field's value. 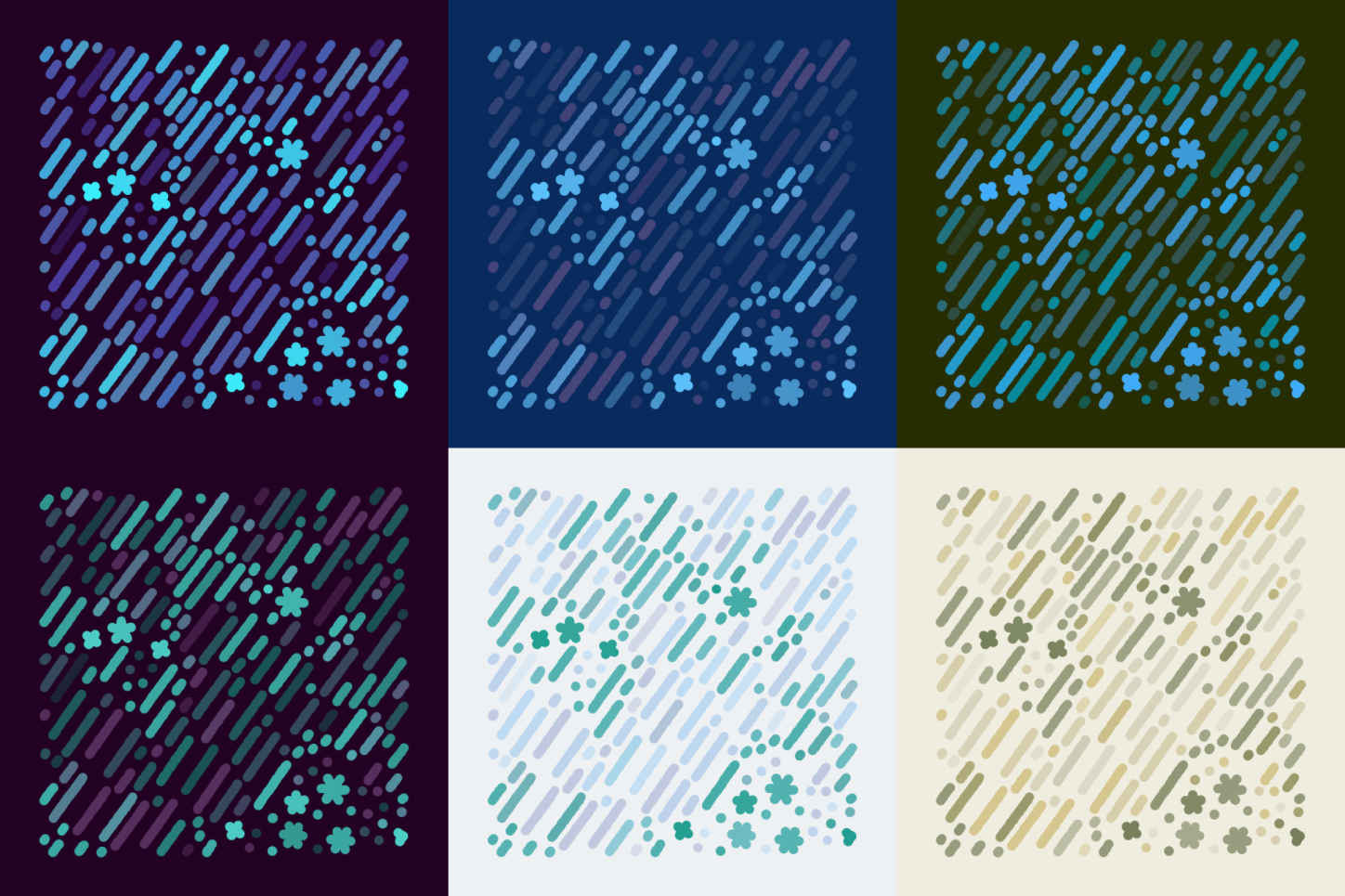 There are six palettes. Four of them are dark: Nebula, Terminal, Winter forest, and Witching Hour. Two other are light: IKEA Showroom and Parched. Note that any palette has a chance of being subsampled (this is an unlisted feature). A piece with multiple regions can pick between its full palette or any of its subsamplings when it starts drawing each separate region.

Lines don't all have the same maximum length, and for each piece, this length is set within a certain range. The range is picked at random on a sliding scale, but for simplicity's sake, all pieces are classified among three length groups. Short lines are capped under 1/12th the width of the piece, long ones can go over 1/10th of the piece, average lines are between the two.

There are four predetermined tip sizes. I see them as guidelines to the scale of an iteration: Fine tip pieces are the best ones to present at a large scale, while fat marker ones (my favorite size, personally) look great even as thumbnails, but can lack in detail if they're too big.

There are four possible panel arrangement, with single-panel being the most probable. An interesting interaction is that larger tip sizes can almost entirely hide their center seams (which might still be revealed by a change of subpalette), while smaller line width yields clean divisions between each region.

Usually, in a Maps for grief composition, some line insertions that should be symbols will draw a simple dot instead. Pieces with this attribute forego the dots, leading to sparser symbol areas. 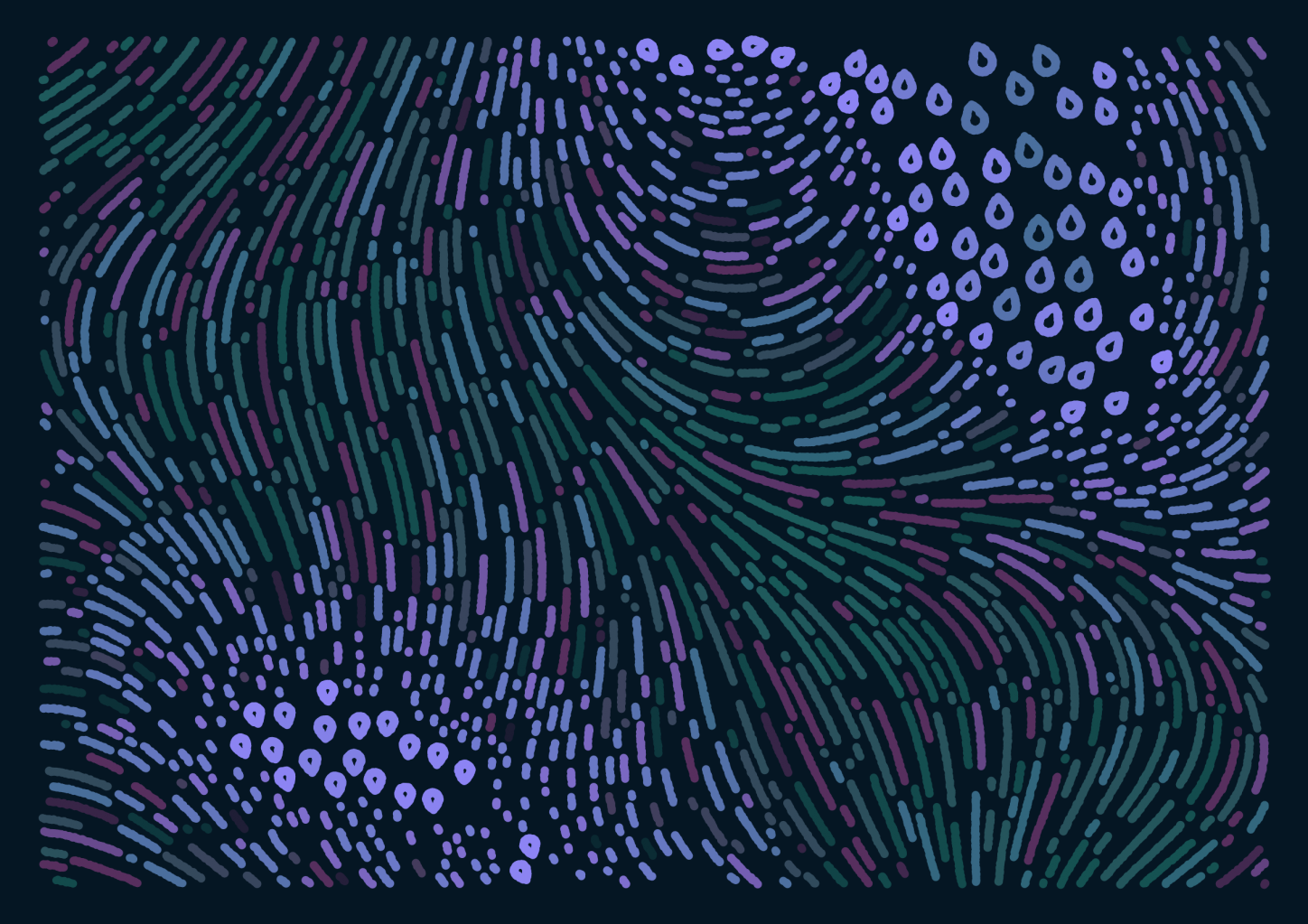 I said previously that each line's maximum length is picked on a sliding scale. This scale is supposed to be affected by the strength of the secondary field. Pieces with the Persistent line attribute have lines that are unaffected and attempt to run their full length no matter where they end. 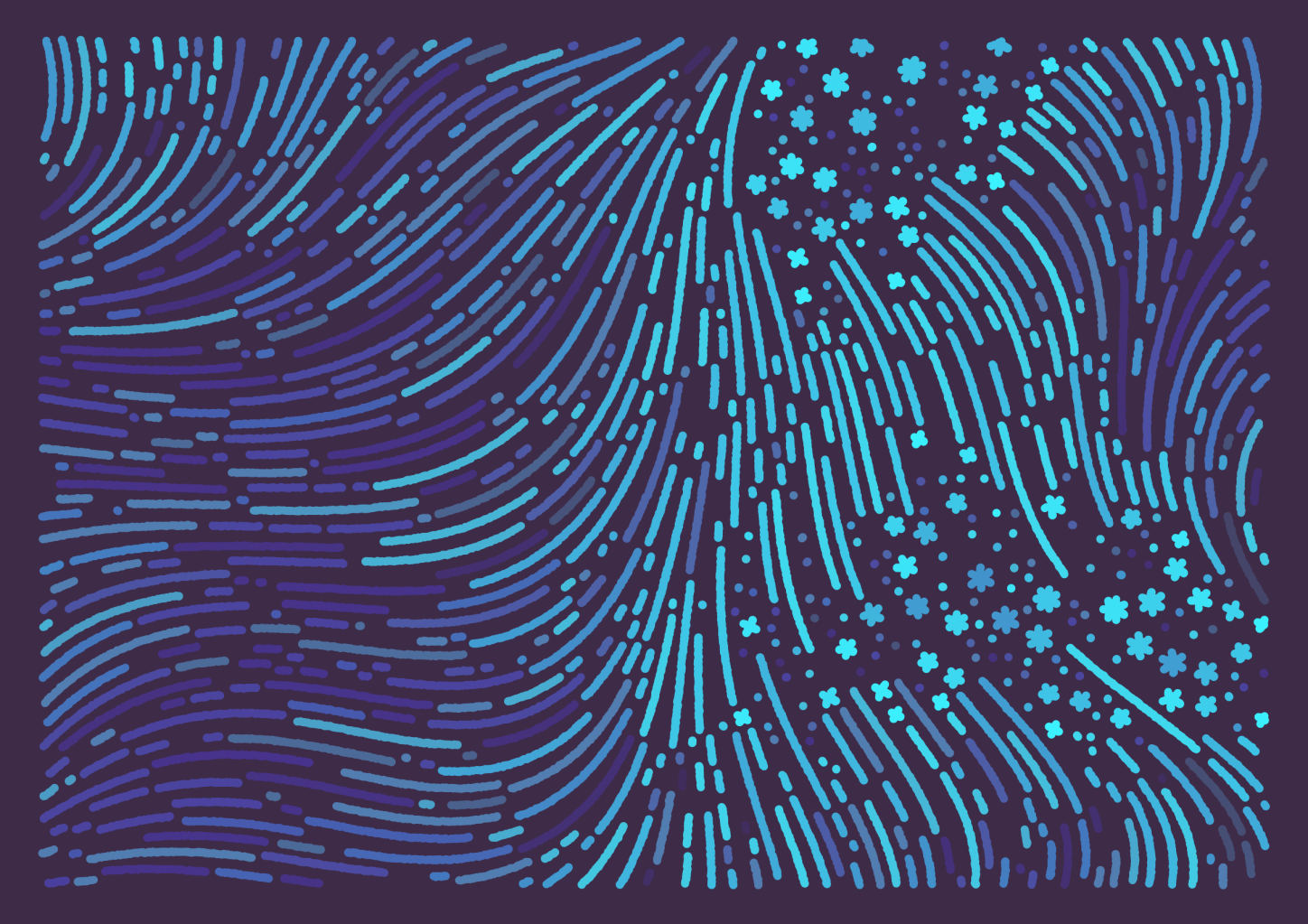 This is an attribute that adds an additional influence to the primary flow field. Radial outputs have their lines aligned in relation to a center that pushes them in or out. Combined with the usual forces of the field, it often yields a spiral composition, though that's not the only possible output. 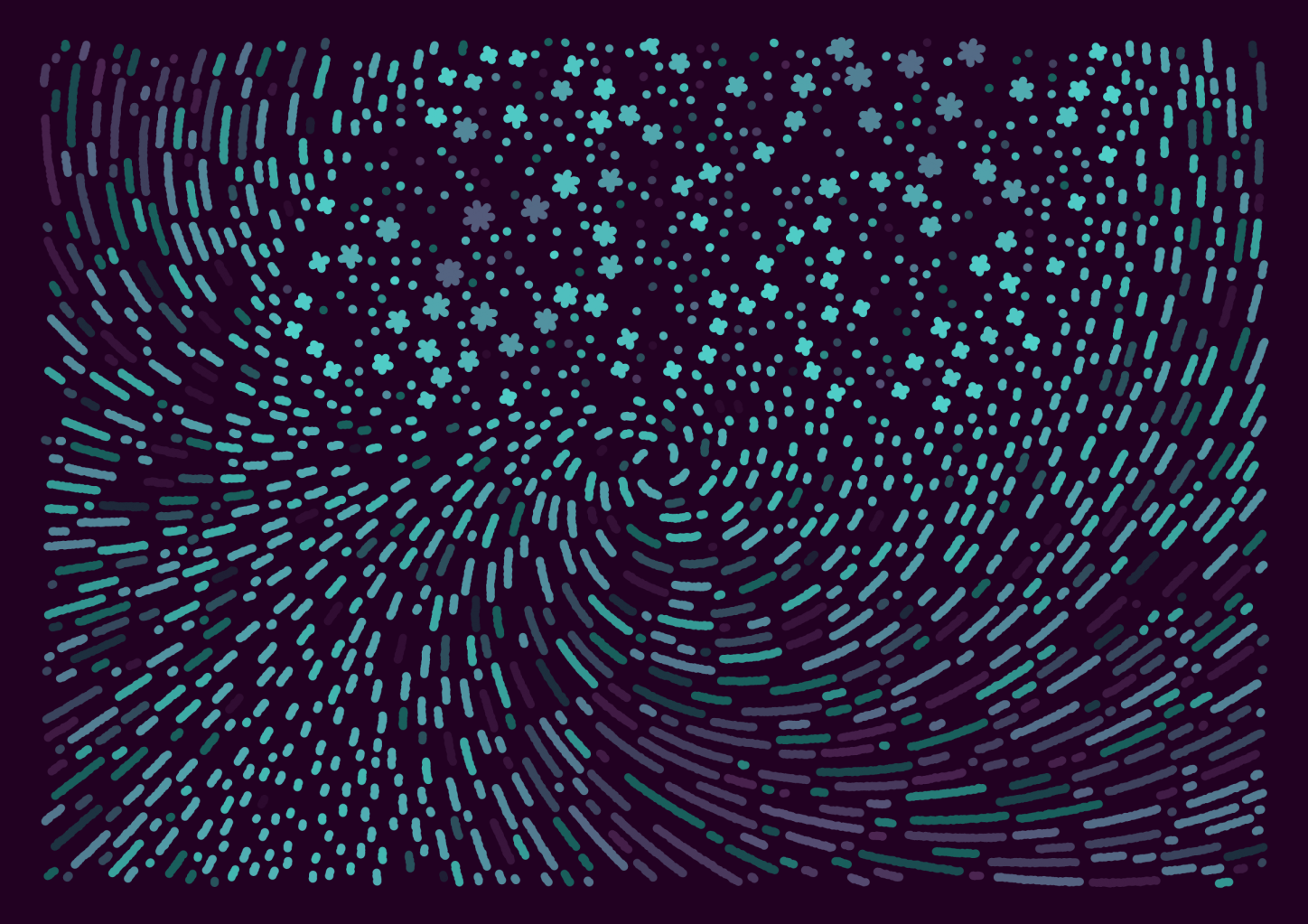 Very rarely, an iteration will not actually have a set coping type. The distribution of coping types should be a flat 25% for each, but it's lower than this because in a very small amount of iterations, the confused attribute means the piece will pick a random symbol any time it has to draw one. There are only ten pieces with this attribute in the whole collection, which is still double the coded chance of them occuring. 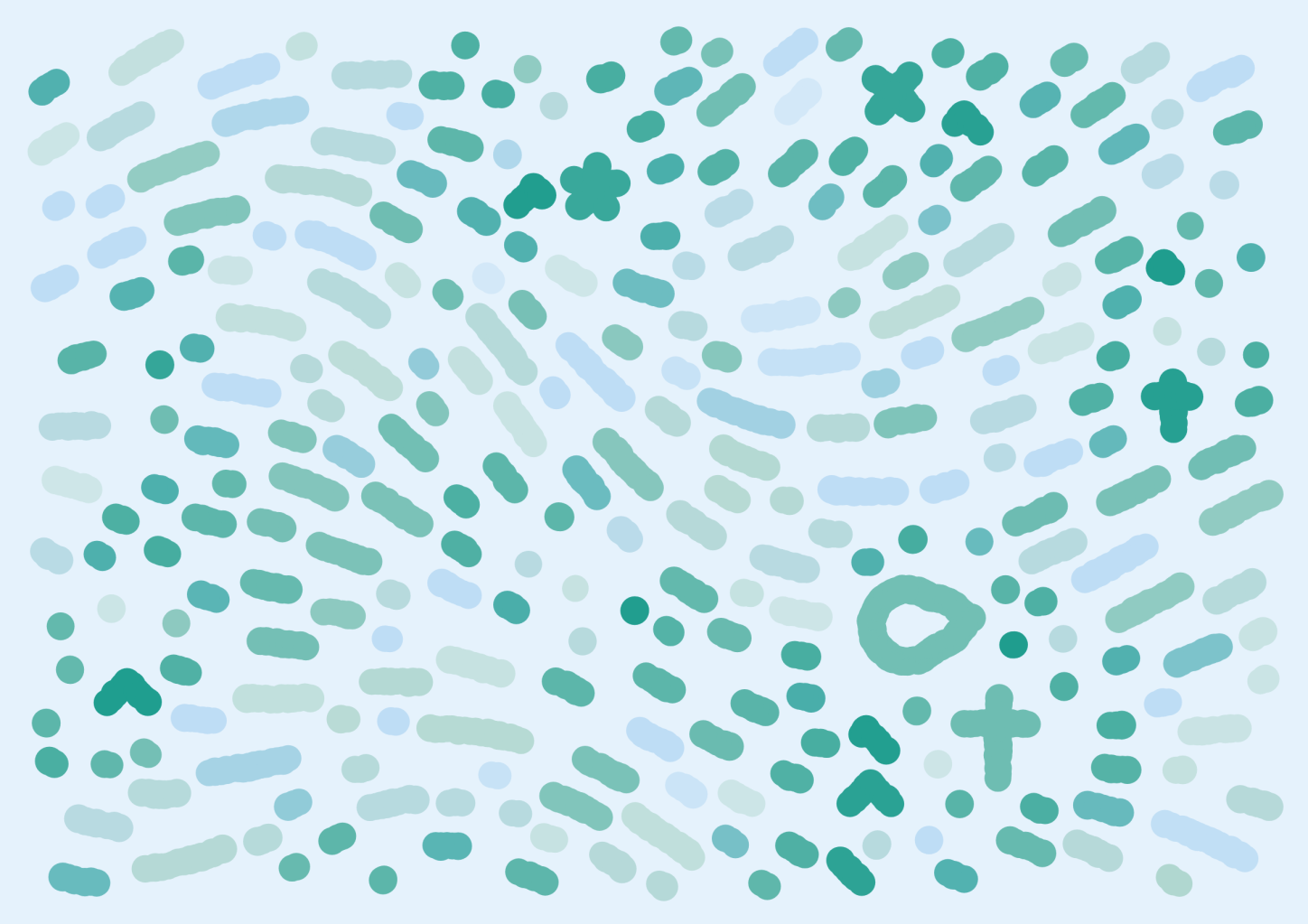 There are other dimensions that are decided for each iteration, with varying levels of influence on its structure and aesthetic.

Palette variants exist for each of the six palettes. The way it works is that each named palette actually has two possible accent colours, and two possible backgrounds, however each iteration picks only one of the accent and background colours, along with a certain amount of intermediary colours.

Drawing jitter determines how "shaky" the line drawing is. This is set in relation to tip size as well, so the outputs with the most jitter are ones with Fat marker tip size. You can get a feel for it by pressing a on the keyboard to animate an iteration in its live view.

Line spacing can vary a bit, and decides how much distance lines must have between each other.

Radial field strength affects compositions with the Radial feature. When very strong, it forces lines to point almost directly to the center, while a low value will draw a soft spiraling composition.

Force field scale decides how much variance can be packed within the surface of an iteration. Pieces with a small scale (think of it as being zoomed out) tend to exhibit small "continents" of symbol areas separated by lines. Larger-scale ones will rather show a single movement across their area.

Flow field base angle and angle range determine the main "axis" of the flow field, and how much lines can veer away from it. Composition with very low angle range are almost linear, while compositions with high angle range and sufficient force field scale are the most turbulent.

Some variables are not exactly set by the seed, as they are adjusted by the generation process later on.

Anomaly threshold (or symbol threshold) is the value past which the secondary field forces lines to turn to symbols. Because the output of the field always varies, the generation process "scans" the field before committing to it. If it finds too little variance, it will lower the anomaly threshold, so that a lesser field strength can allow symbols to appear.

Field offset also affects the secondary field. When the generation step finds too little variance in the field, it also moves it around a bit – think of it as moving a picture frame above a larger canvas, to see a different part of it. This is done in conjunction with a light change in the anomaly threshold.

Palette/restricted palette is a changing list of available colors that the drawing script picks from. In single-region outputs, it does not change, but in multiple regions, it has a chance to change and pick a new subpalette (or go back to the full palette) before each.

If you want to try your hand at picking out the expressed features of a given iteration, feel free to browse the collection. It's possible to do so on Artblocks where it was minted, on places like Artacle, which will let you filter a collection like this using its different features, and on Opensea, which is more of a marketplace.

Oh, still here? Okay – if you're interested, I've done three of my own analyses to get you started. Enjoy, and thanks for reading! 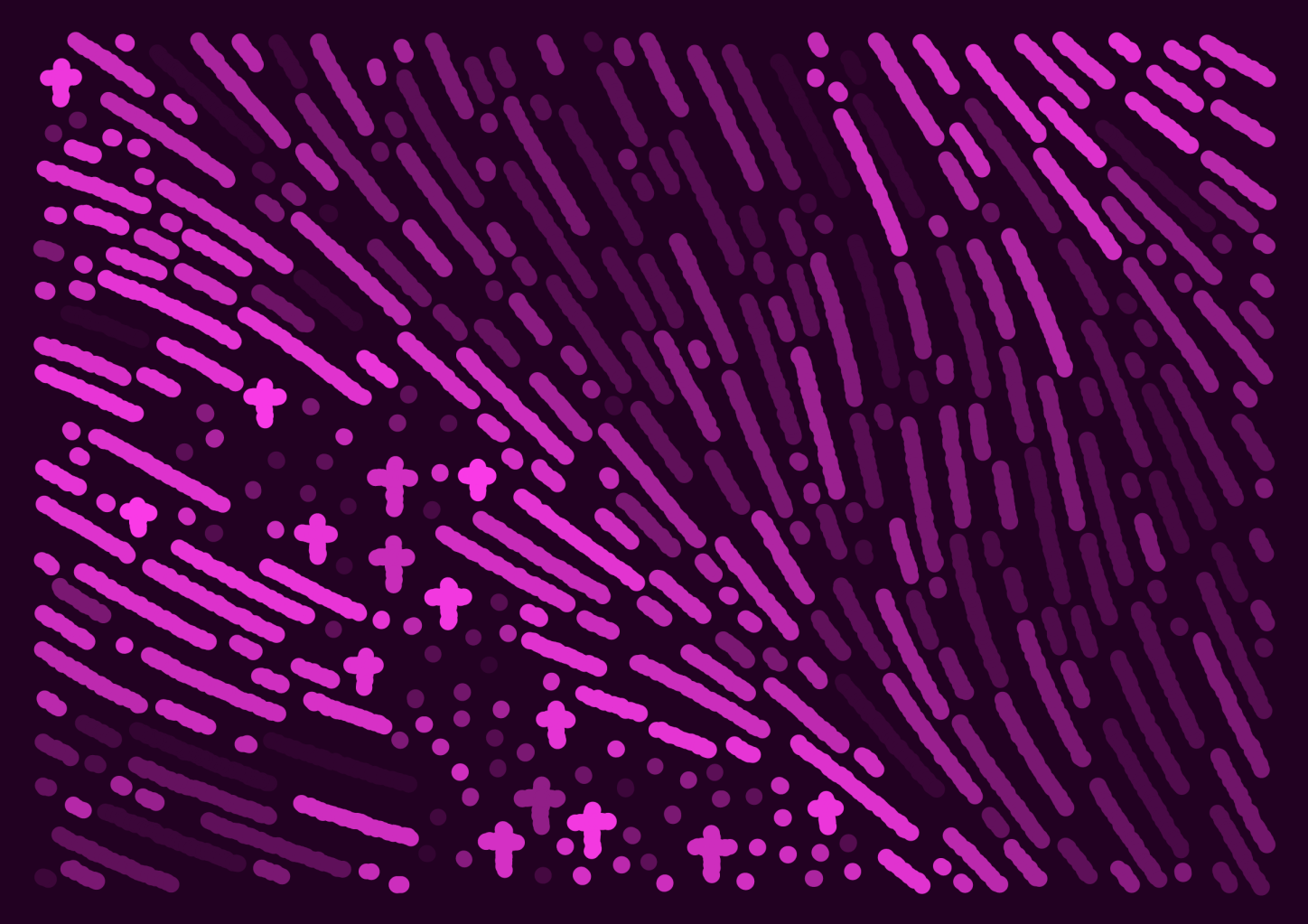 That's iteration #443. Thick line width, long strokes, single region. Its crosses means it has spiritual coping. It has the intense magenta of the Nebula palette. And since it's only showing magenta, we can tell it's subsampled. Its long lines also extend into symbol zones, meaning it has the rare persistent lines feature. We can also tell that the angle range is rather narrow, because the darkest and the lightest parts of the composition are oriented within a quarter-turn of each other. 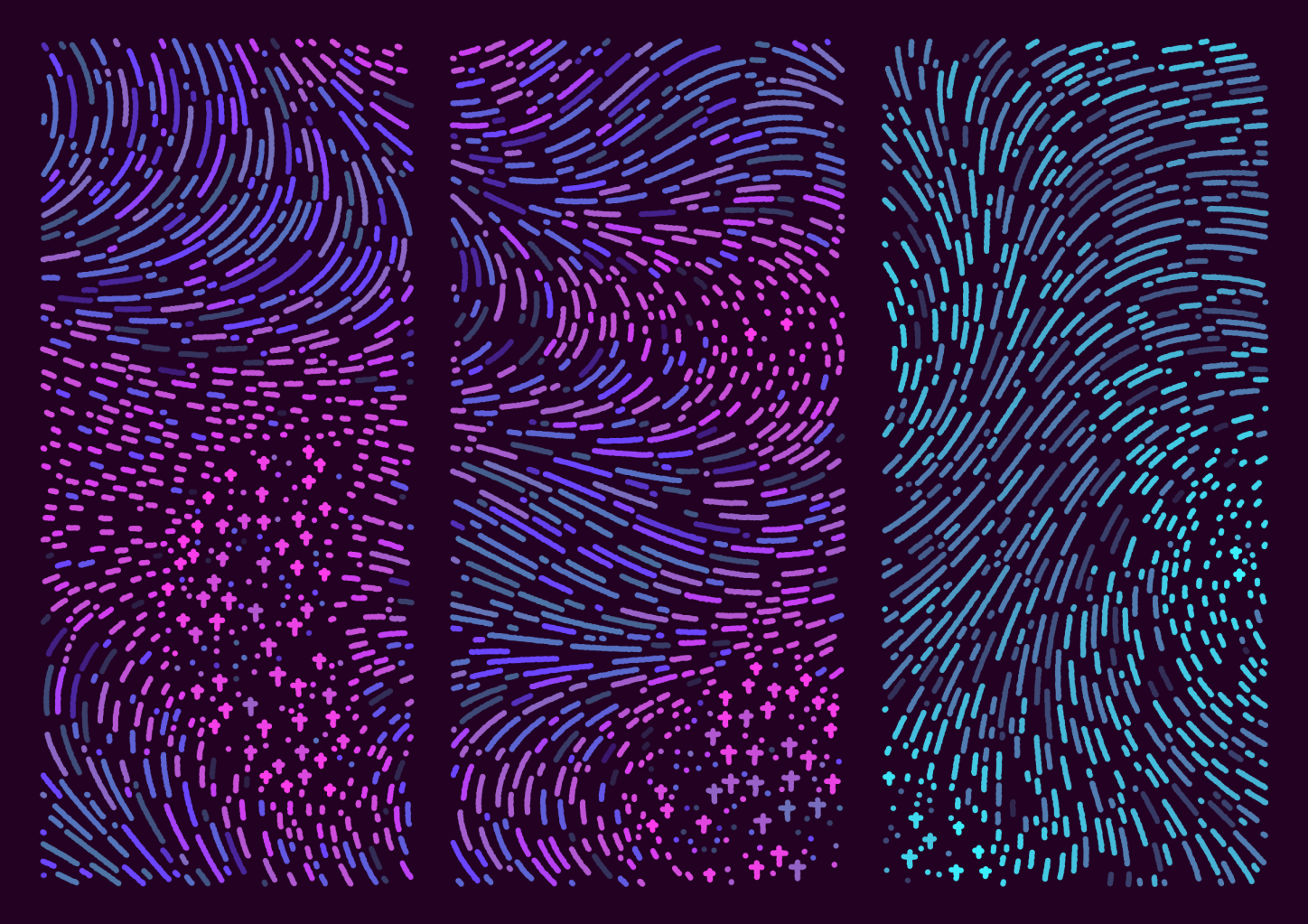 Here's iteration #430. It's a three-panel composition, and again uses the Nebula palette. The first two panels seem to use the full range of the palette with a magenta accent, while the third panel has a subsampled palette based on the turquoise accent. With lines this narrow, the tip size is probably Fine. This time, the noise scale seems rather large, because there's a lot of variation across the whole piece. Similarly, its angle range is quite high – the flow field is able to turn back on itself, and it's hard to tell what the base angle might be. In comparison, it was very easy to guess the average angle in #443. As a consequence of its narrow line width, it will also have rather precise drawing jitter, meaning its animation will be softer, up to pretty large display sizes. 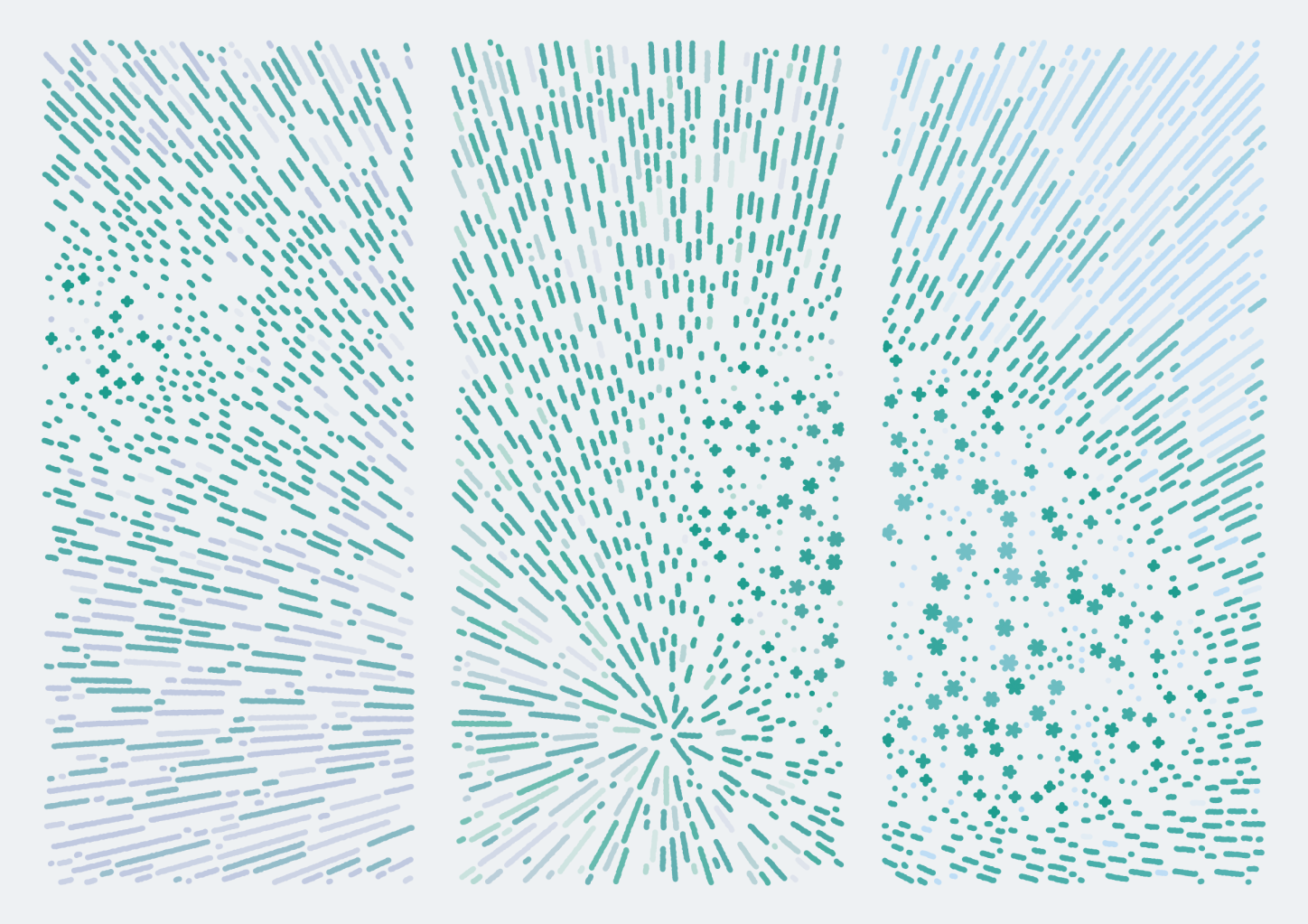 And here's #23! Again, a three-region composition, this time with mystical coping, as indicated by the stars. If I want to follow how strong the secondary field is, I can look at how large the stars are, and how many branches they have. The third panel also seems to have picked different transition colours from the IKEA showroom palette the piece has. The top-right corner lets us see that it's showing a light blue where the rest of the composition would use the light purple/gray (lower left). It also has the rare radial attribute, and its radial field strength is very strong – we can hardly tell the influence of the primary flow field over the drawn lines. It also has an off-center radial pull, which only happens to half of radial compositions (that's another untracked rare feature for you!).